Growing up, we were a cat family.  My brother was allergic to dogs, but not to cats...so ever since I can remember, we had a cat or multiple cats.
The first cat that we had in my lifetime was Molly.  I have no real recollection of her, except a picture or two and a story or two.
This picture of Molly is dated November of 1982, making me three years old at the time. 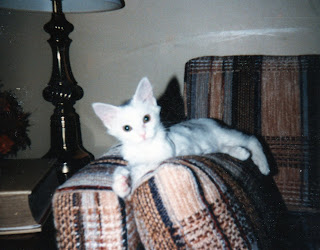 Somewhere around 1984 or 1985, Molly had three kittens (can't remember what we named them) and shortly after that, we apparently gave Molly *and* the kittens away.  Can't say I blame my parents - 4 cats is a lot.
Here's my brother and I with the 3 kittens. 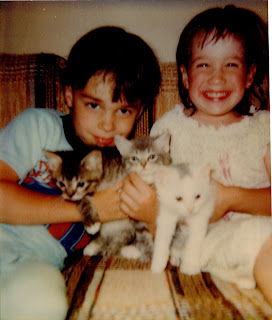 Sometime in 1985 or so, we were visiting my Grandparents in D-ville and there were two stray cats roaming around that I immediately fell in love with.  Somehow or another, the cats ended up coming home with us (I probably batted my eyes at my Dad).  ;)
We named these two new cats Midnight and Tiger.  Midnight was black, hence the name and Tiger was black and grey striped, also, hence the name (we were so creative, huh?).
Unfortunately, Midnight ran off less than two weeks after we brought him home, but we had Tiger for about two years. 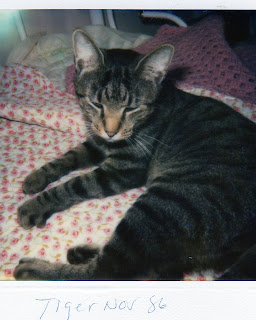 Tiger was hit by a car one afternoon in 1987ish and some folks found our info on his collar and came to our house and notified us.  He was a good cat, and me being around 7 years old (and my brother 9), it was a hard loss.  My mom said we called her at work (we were home with my Dad) crying our eyes out.  Sheesh.  Sorry to bring the party down.
On to happier times for the next 21 years!
Later in 1987, still reeling from the loss of Tiger, my Mamaw called with news that her niece had found several kittens abandoned by someone in a trash can.  I must have really batted my eyes this time, because against my Dad's better judgement, we brought yet another cat into our home.  And this time, to avoid the ill-fated scenario that happened to Tiger, we de-clawed this cat and he was strictly an indoor cat.  My Dad was never a fan of animals in the house, so up to this point, they had all been mostly outdoor pets, with an occasional inside treat.  I guess he just couldn't bear seeing us loose a cat like that again, so he obliged, although he never really liked the indoor idea.  And ironically....maybe laughably?....Floyd (which is what we named this new cat) lived for 21 years, *inside* the house!  That's right, my dear, sweet, honorable father changed the cat litter every week for the next 21 years.
There was a man at my Dad's work (a rather goofy man) that nicknamed my brother and I, Floyd and Irene.  Every time we'd see him he'd say, "well there goes Floyd and Irene" or "how ya doin' Floyd and Irene?"  So, anyhow, that's where we got the name Floyd.  He was my playmate and was willing to endure just about anything I put him through. 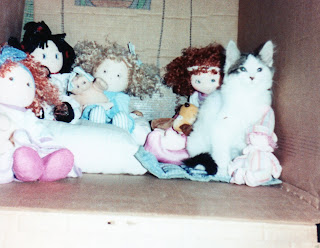 Floyd was the most awesome cat ever!  Even friends of mine that are not cat people at all liked Floyd.
Here he is all covered up with blankets and surrounded by stuffed animals in my doll crib, probably circa 1988-89? 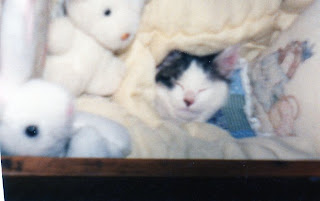 And this photo is around the same time - love the silhouette of my 80's box perm.  Floyd *loved* to be held like a baby and cuddled. 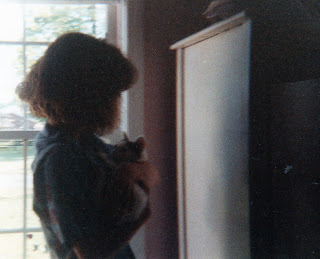 Floyd cracked us up a lot too when he often sat up like this: 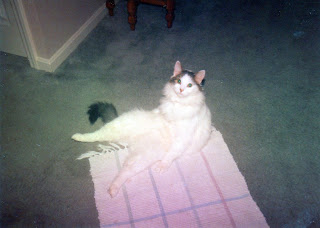 He was by far my favorite pet growing up, but how can a pet that you have for 21 years not be?? 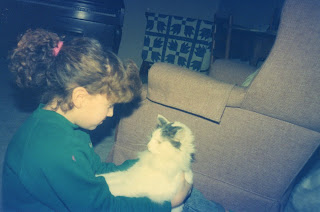 Floyd loved back yard time.  Since he was de-clawed, we couldn't leave him outside unattended very long, for fear he'd get out of the yard and not be able to defend himself.  He did, occasionally, sneak and we'd find him sunning himself on a neighbor's front porch. 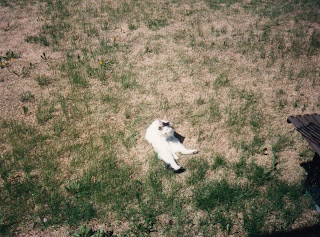 Isn't such a pretty cat?  He loved laying on this old tree stump in the backyard too - I've always wondered why? 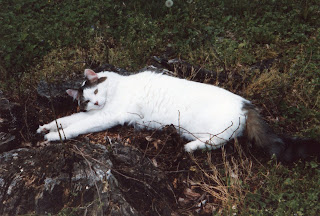 Mom described Floyd as "regal."  I agree, doesn't he look like King of our house? 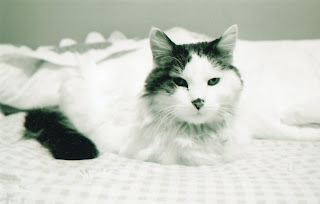 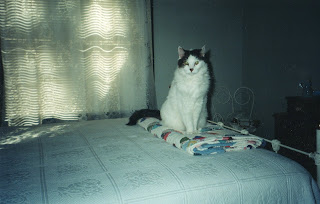 Well, as if one inside cat wasn't enough for my father, long about 1991, I found another cat. 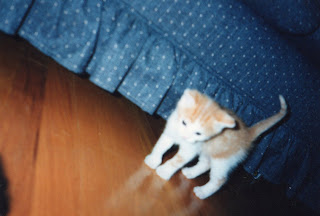 We found him under our front bushes and although my parents original plan was to give him away, they eventually let me keep him.

We named this one Punkin, since he was orange.
He was so tiny and little and cute!
Here's my brother holding him: 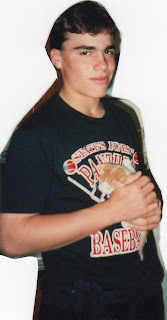 Punkin was afraid of his own shadow, way too curious and although we never had it diagnosed, we're pretty sure he suffered from Attention Deficit Disorder (if that's possible for cats).
Although he could be very annoying, right under your feet all the time, sitting on the pile of homework you're trying to do, or meowing inquisitively....he was also sweet, endearing and funny. 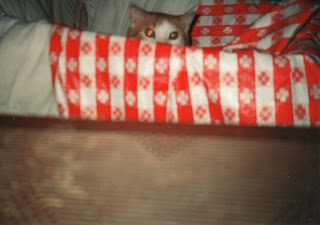 You can see how quickly Punkin started to look more and more like a real pumpkin.... 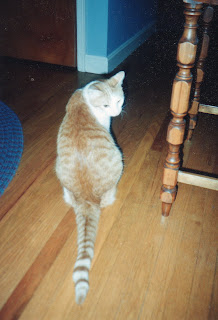 He weighed upwards of 30 pounds when it was all said and done!  Quite the contrast from his younger years (don't mind the horrible picture of me on the left!)

Floyd and Punkin got along pretty well.  Sure, they had their moments here and there when Floyd had had enough of Punkin nipping at him at the food bowl and we'd hear them rearranging the furniture for us as they chased each other through the house, paws squeaking on the hard wood as they rounded the corners.  But all in all, they were good companions. 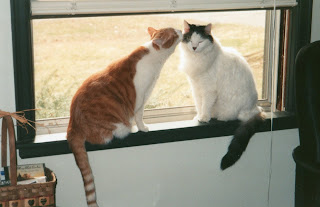 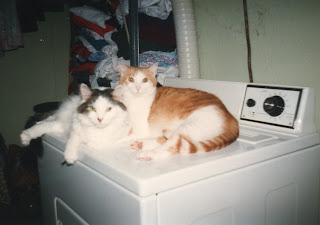 Long about 1995 (the year my brother was graduating from high school), we found Floyd motionless in the basement.  He hadn't moved all day.  It was really scary.  We moved him upstairs to the cold bathroom floor thinking maybe he had a fever and needed to be cooled.  When he didn't get better, we took him to the vet and found out he had a very bad urinary blockage.  Mom jokes that we had him on life support to save his life and Dad jokes that it was his one and only chance to have gotten rid of Floyd.  But alas, Floyd survived and we brought him back home to live many more happy years with us. 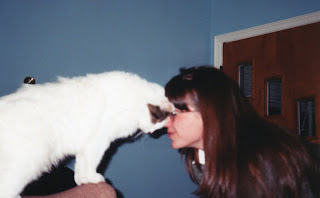 Love these shots my Granny got of the cats both sitting on the same chair at different times - that was certainly the "spot!"

Punkin (maybe because he was so large?) died first in March of 2007 at the age of 16.  Mom thought he had been sleeping and found him with Floyd curled up right by his side.
Floyd died a year and two months later in May of 2008 at age 21.  Mom and I were with him.  She called me, thinking the end was near for him, and I came over and got to sit and pet him while he took his last breaths.
I know a lot of people aren't crazy about cats....but how joyful and fun it was to grow up with pets!  I'm thankful to my parents for allowing us to have them.  And I thank God for the companionship he allows us to have with animals. 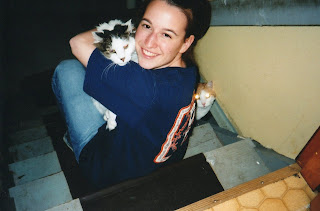 Awwww, that's one of the many reasons that we are such great friends - we both love kitties! :) Love the post and all your cute pics!