The last few weeks I've been working overtime....gradually adding more hours onto each week.  I worked an extra 9 hours the first week, an extra 9.5 hours the second week and so far this week, I've worked an extra 5 hours (in one day)....with plans to work an extra 5 hours almost every single day this week....which would make about 20-25 hours of overtime for this week alone (not including the how much I might work this weekend).

The reason for all the overtime is the completion of a project at work.  It seems that it always happens this way in the business I'm in.  We work on the same project for 6-8 months and then there's the scramble of last minute details and coordination to finish it all out.

Fortunately for me - I get overtime pay since I'm an hourly employee.  So, at times I welcome the chance to earn a little extra cash.  It doesn't make it fun at the time usually....because essentially I have no life for a few weeks, eating dinners at my desk and having to turn down invites for much more fun things than OT.  But, once the project is over with and I have my time back (and an increase of green in my pocket)....it all seems okay and even a little worth it.

This extra pay will come in handy lately as I have several things I need to pay for:

Mission Trip to Honduras
Day 1
Wednesday June 2, 2010
Our group with our "team shirts" on.  At least we were easy to spot in the airport.
From L-R: Grant, CJ, Mel, Rick, Bill & Decker 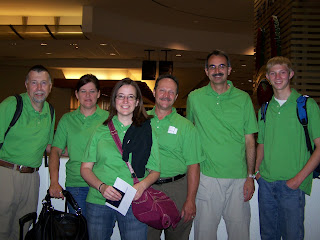 Waiting to fly out of SDF...apparently I was the only one excited about being up at 4:30 in the morning. 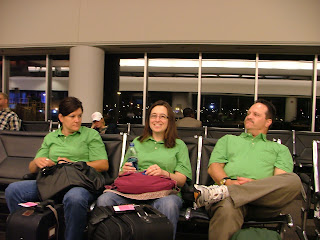 Arriving in ATL for our layover.  Still lovin' the green shirts!  Lots of people stare when everybody wears the same shirt. 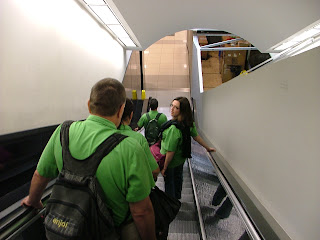 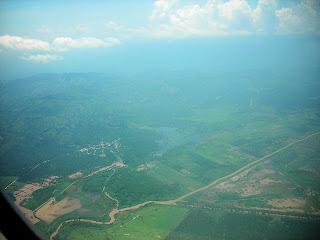 Getting through customs this year was a breeze.  Unlike last year, when it took about an hour or so. 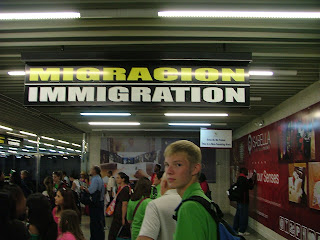 Once we got through customs, we loaded our luggage into the van and we were on our way. 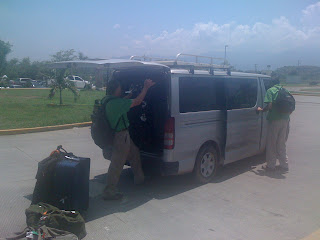 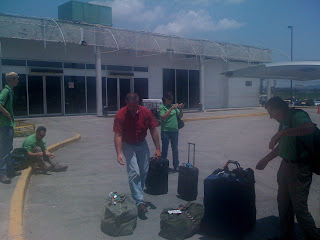 We also rented that white truck to get around in since the Missionaries' 2 other vehicles were in the shop. 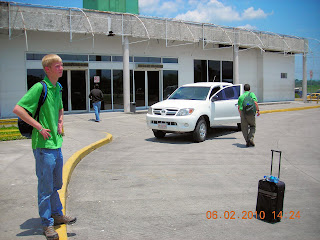 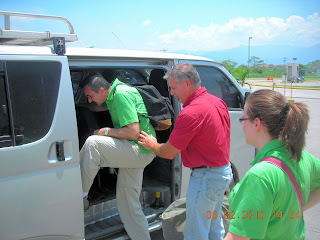 On the road!
It's about a four and a half hour drive up into the mountains where we stay.
Here, we are behind a truck full Hondurans passing a brightly colored banana truck. 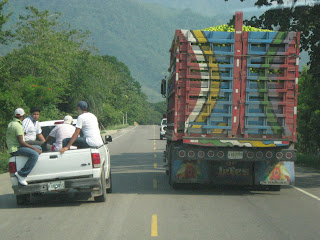 This is the way most Hondurans typically travel (and how we traveled in the mountains last year) -  in a truck with side rails....holding on for dear life!  It's amazing how they all stay in there. 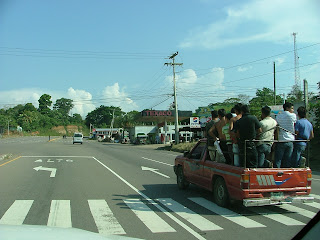 We took about $6,000 in US currency with us for all the supplies, food packs, our personal room & board, travel within Honduras, etc.. so we had to get it changed into Lempiras (Honduran currency) also known as Lemps.
Here we are at the bank (please note the heavily armed men guarding the entrance). 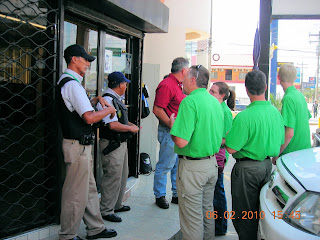 It's hard to see, but they are going through my bag before I entered the bank.  I gladly opened it as wide as I could and thanked them in my best Spanish....you don't want to upset men with big guns. 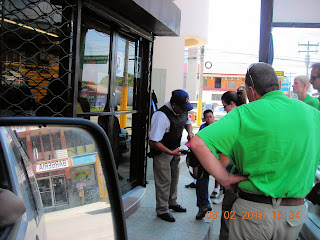 CJ waited in the van for us and was rightfully scared of the men as well. 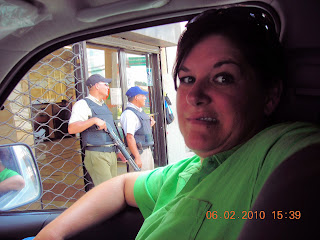 Rick and Bill were carrying around all the Lemps we got at the bank. The exchange rate is about 18 Lemps to just one of our dollars. So in exchanging $6,000 US dollars, we ended up with about 108,000 Lemps - of all paper money - quite a massive stack!  Their money belts were stuffed! 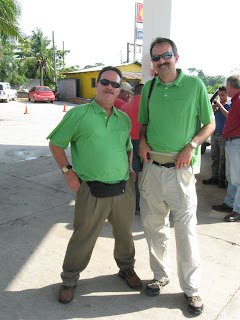 We stopped at a gas station along the way and I bought popcorn from this little girl (unfortunately I didn't eat it because of the possibility of it making me sick, but hopefully it helped her out a bit). 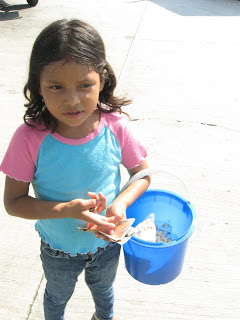 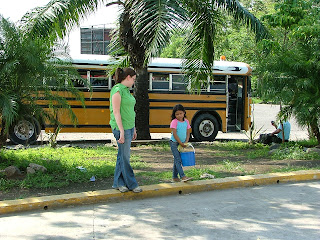 We continued on our journey and at one point, we came around a really sharp curve to find a rather gruesome scene.  The description that follows might not be for the weak of stomach!  Read with caution.
There was an older man laying the in the middle of the road.  He had obviously been hit by a car and then dragged for a while.  He was very bloody - bleeding both from an open hole in his head and from feet that were rubbed and scraped raw from being dragged.....leaving them almost unrecognizable as feet.  You can see a group of people gathered around him in the background of the picture below. 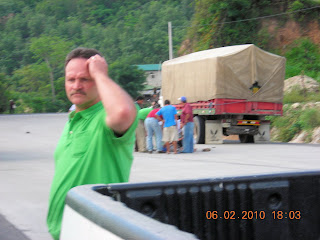 The men from our team decided to hoist him into the back of our white pick-up truck and take him to a nearby hospital.  Right after the men had moved him from the road to the truck, an ambulance showed up.  The medics treated him in the back of the truck before transferring him to a stretcher to get him to the ambulance.  I never personally saw the man close-up (although I saw a picture later that Bill had taken of him).  But all the men in our group said it would be a miracle if he survived because his injuries were so extensive and Honduras' health care is less then sub-par. 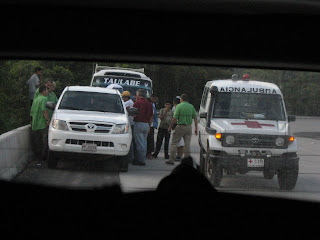 The man's blood was pooled in the back of our pick-up and on the road where we had found him.  The ambulance left with him in tow and we somberly drove on our way.  Keith, the Missionary that lives there, said that whoever hit the man didn't stop because he would have been thrown in jail and held responsible (even though it may have been the pedestrian's fault) and forced to pay all the medical bills.  He said hit-and-runs happen all the time there because it's more of a guilty-until-proven-innocent system.  It's a really sad situation there...no one taking responsibility out of fear....leaving that man to die on the street......
We did stop (at the house nearby where this man was hit) on our way back to the airport the next week to see if we could find out if he had survived or not.  Surprisingly, we were very glad to find out that he had lived and had been transported to Tegucigalpa, the Capitol City of Honduras for better treatment.  They said he was in serious condition, but that he was doing better.
After getting back on our way up the mountains, we made a pit-stop at a house where the owners make and sell hammocks.....among other things. 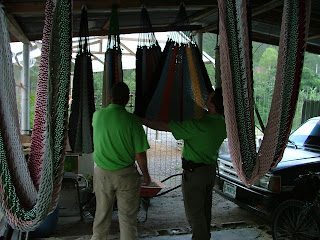 The men in our group were planning to spend a night in the village of El Zapote in the church we helped build last year.  So, they decided that hammocks would be their best bet for restful sleep....instead of sleeping on the hard ground with the possibility of a bug or an animal crawling on them during the night.
I scoped out a hammock too, but decided not to buy one since I don't have a good place to put one....but one day I *will* own a Honduran Hammock! 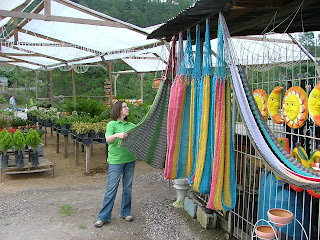 After the hammocks were purchased, we made one last stop along the way to grab some beverages and use the restroom.....
The "Rest Stop" had a pretty fountain area and several Toucan birds in a nearby caged area. 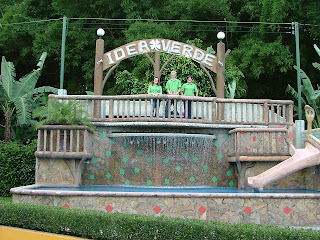 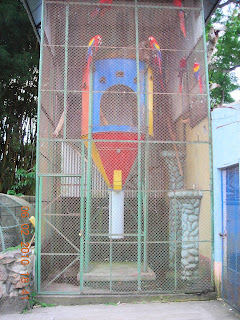 "Home" at Last!
We finally arrived at the complex where we would stay all week.... 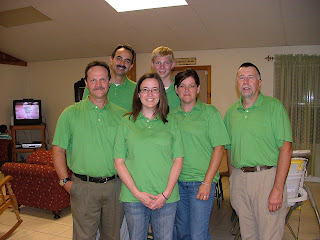 .....and had to get one more Team Picture in those awesome Team shirts!
cares casted by Mel at 5:10 PM No comments: